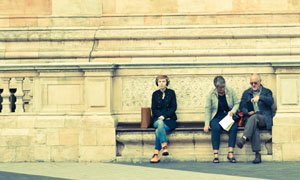 Its been an interesting couple of weeks in the UK. We’ve seen some of the world’s most powerful people get together to talk about something called ‘Inclusive’ Capitalism and we’ve seen UK politics turned upside down by an extremist party whose values could hardly be less inclusive.

From what I’ve seen and heard about the ‘Inclusive’ Capitalism event it was more about how we save capitalism than people and planet. I’ve asked them if they would be interested in hearing from the non-powerful so we will see if they respond. Those of us involved in the Real Economy Lab, including Neal Lawson of Compass, feel we have quite a few suggestions about how our economics could become more inclusive.

Perhaps UKIP has done us all a favour by showing that emergent new parties can make a real difference to whats seemed like a stale political life.

Perhaps its time for progressives to get their act in gear, dump the dead left-right, state-private dialectic and start a new party – a peoples party. A party of, by and for the people.

Despite the language of ‘peoples army’, my suspicion is that few are fooled by the idea that UKIP represents the interests of wider society. A real ‘peoples party’ would need to properly engage with the hopes, fears, dreams and aspirations of the citizenry, not just pander to our insecurity and feeling of disempowerment which our stale political life has burdened us with.

So what might our new peoples party stand for? Above all it would stand for the 99%, for truly inclusive economics and real democracy.

It might stand for a shift in the current political and economic system towards a peer-to-peer participative, deliberative and socialized control of economic and political life and decision making. This might mean the end of party politics as we know it and certainly the end of the centralized, cabinet-centric, punch and judy world of Westminster. If participative democracy can work in Porto Alegre, New York and Newcastle why not in Margate, Bristol and right across the UK?

This new form of economic-democracy could bring a radical reclaiming of the power of the citizen over that of capital. It might reverse the power structures of capitalism so that labour employs and controls capital rather than the other way round. Associative enterprises along the mutual and co-operative model would flourish and bring power back to the citizen so that we are all vested and invested participants in our economy. If it can work for Emilia Romagna, the US Business Alliance for Local Living Economies, the Quebec Social Economy and communities such as Marinaleda, then why not make this the norm for UK commerce?

Economic democracy like that could liberate the innovation and drive of peer-to-peer, open source wiki-world which is already pushing at (if not way beyond) the boundaries of our old economics system. As Kevin Keely, former executive editor of Wired has said “How close to a non-capitalistic, open source peer production society can this movement take us? Closer than we thought.” Its what Jeremy Rifkin terms a “collaborative commons eclipsing capitalism”, and of which Harvard’s Professor Jim Heskett says “Now questions are again arising about whether we are about to experience a post-capitalist society centered around the creation and sharing of goods and services that have marginal costs approaching zero”.

Perhaps the peoples party could call for an end to the perverse, anti-social, state-finance nexus and for a radical transformation of our finance sector, and an end of the right of too-big-to-fail casino banks to create money into existence out of thin air. We could see a flourishing of ‘patient capital’ in a local, regional and national social-investment web focused on nurturing an economy fit for people and planet not fat-cas. If it can work for German state and regional banks, French regional and mutual banking, for Mondragon’s Caja Laboral and the flourishing credit union space why not for the UK investment sector as a whole?

And how about campaigning for a fairer world in which the interests of the 99% not the 1% were paramount? An unconditional citizens credit, 100% inheritance tax and other fair-share measures could bring an end to the genetic lottery which has concentrated power and wealth in the hands of the few. If the ideas of Picketty and Wilkinson and Pickett have resonated with so many of us, on the left and the right, why can’t we put their ideas into action?

And how about a party which delivered on hug-a-husky, big-society, responsible-capitalism rhetoric and actually delivered a light-touch, enabling state which set the rules of the market in a way that they delivered prosperity and flourishing lives for all citizens without trashing the planet?

A peoples party could deliver on all of this with a popular and empowering vision of a fairer world where the intrinsic values of collaboration trump those of competition, where ‘we are all in this together’ beats ‘every man for himself’, where community counts for more than nationalism, where ‘good lives for all’ becomes the mantra instead of ‘shop till you drop.’

Who might be the first peoples party MPs? Well it might be you or me. It might suit people currently working at the grassroots as community organizers or in things like Transition initiatives. Or those many disaffected MPs in the Conservative, Labour and Lib Dem parties who recognize how sclerotic their party machines have become.

Old dogma and tribalism won’t need to feature in this new politics. It could take the best from the old but update it to the future. It might have echoes of the first version of clause IV from the Labour movement, which was about collective control of power. It could learn from progressive conservative and republicanism instincts. But for the first time in generations it will move us beyond the idea that its either capitalism or socialism which has all the answers and focus instead on something fresh and new.

You might think all of his sounds utopian and other worldly. But elements of all of this actually already exist and indeed flourish in the world around us. We need to collaborate and catalyse, cross fertilize and build a better future out of all of this innovation. That would be the job for a peoples party – to make these dreams a reality.

Now the dog whistle of UKIP has stirred us out of our reverie, lets not let Farage and his sirens draw us any closer towards their solitary, nasty, brutish ways. Lets chose a better way, lets make an opportunity out of a crisis. Let the 99% take back control.